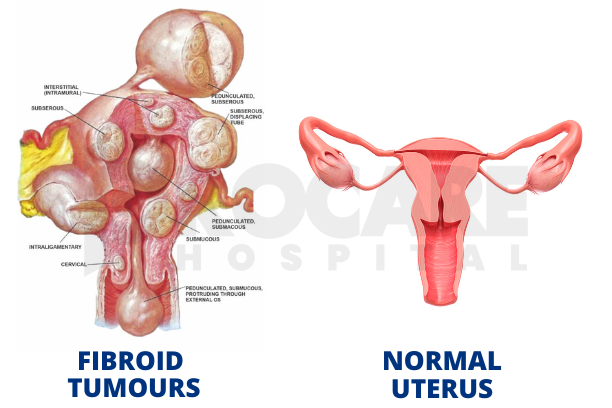 Fibroids are the most commonly diagnosed gynaecological tumour. Most common among blacks as compared with white caucasians.

There are few known risk factors for uterine fibroids. They are:

The exact cause of fibroids is unknown however, research and clinical experience point to these factors:

The growth and location of a fibroid are the main factors that determine if a fibroid leads to symptoms and problems. Different locations of the fibroids include:

Most times, fibroids present with no symptoms. Symptoms depend on location, size and number of fibroids. Some symptoms of fibroids include:

Fibroids can be diagnosed by:

Asymptomatic Fibroids may not need treatment. Symptomatic fibroid treatment options can be

There are 3 types of myomectomy:

HYSTERECTOMY: This could be partial or total removal of the uterus (womb). It remains the only proven permanent treatment for uterine fibroids. This is only considered in extreme cases.

Fibroids left untreated in severe cases can lead to complications such as infertility or problems during pregnancy such as miscarriage, pain, premature laboir and delivery, fetal growth restriction, placental abruption etc.

If you suspect you have fibroids, please speak to your gynaecologist.

July is Fibroid Awareness Month! Many women have uterine fibroids sometime during their lives but most women don’t know they have fibroids because they often cause no symptoms!

Throughout the month of July, @procarehospitalabuja will be running free ultrasound scans for those who want to know their fibroid status!

Knowing your status early can lead to early treatment that can increase your chance of having your dream family!